Artificial Intelligence – is a multidisciplinary field of studies lying at the intercrosses of computer science, mathematics, cognitive science, linguistics, logic etc. This field witnessed a few drops and rises throughout a half-century history, since 1956 when the first seminar on AI was held and the term was coined, and nowadays we are obviously witnessing another period of high expectations. Russia (and former USSR) has a long history of AI studies with 1988 becoming a major milestone – Russian Association for the Artificial Intelligence (RAAI) was founded. It’s the largest national academic body in the field, uniting more than 500 of members, and is the most competent academic AI organization in Russia. Since 1988 RAAI organizes biennial (from 2018 – annual) national conferences on Artificial Intelligence: Russian Conference on Artificial Intelligence (RCAI). Despite having International status, before 2018 the conference proceedings were published in Russian and were indexed in the Russian Science Citation Index. 2018 is the first year when selected high-quality papers of RCAI are published in English volume (Springer): 934 volume of “Communications in Computer and Information Science” series. 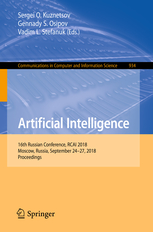